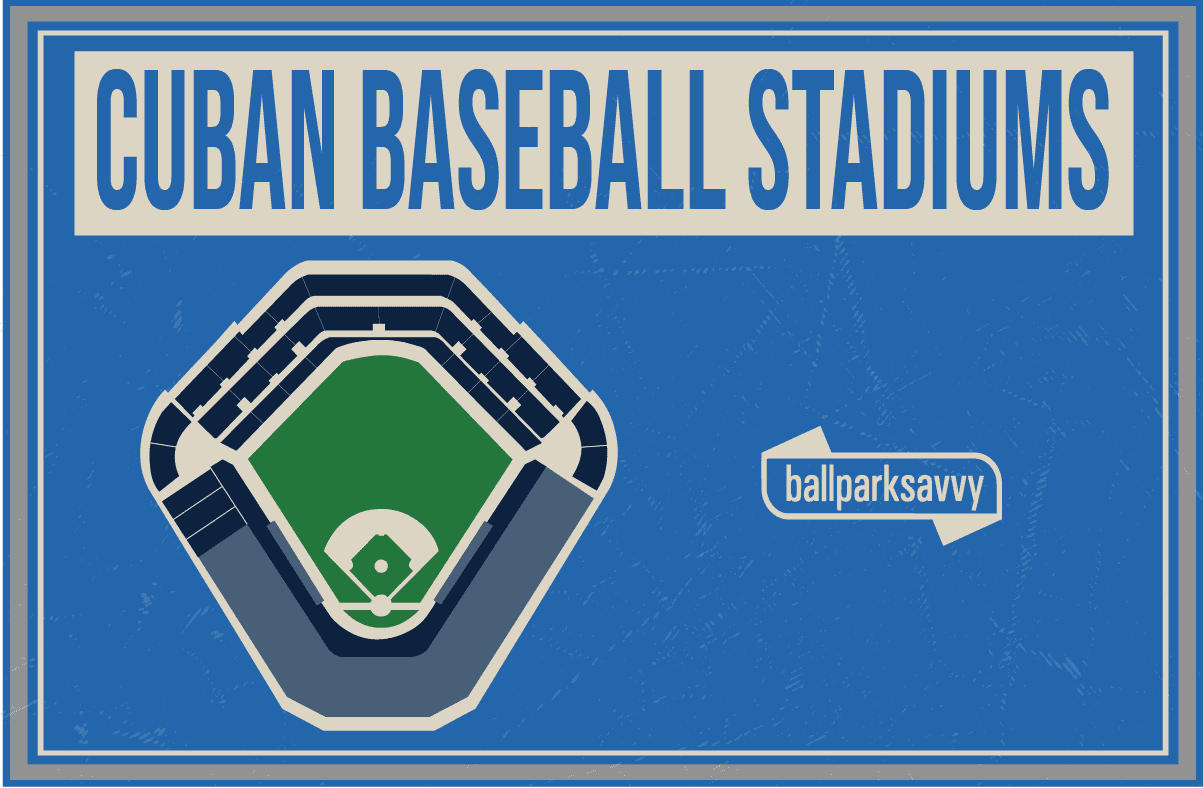 If baseball is as American as apple pie, it’s also as Cuban as a Cohiba cigar.

Baseball is Cuba’s national sport. From kids playing stickball in the streets of Havana to boisterous stadium crowds to players on the national team who are admired as heroes, the passion for baseball runs deep.

Why Baseball Is So Big in Cuba: A (Very Brief) History

Baseball has been a way of life in Cuba since it made its way down to the island shortly after the sport was invented in New York in the mid-1840s.

It arrived via visiting American sailors who played pickup games with locals and via Cuban students who went to the States for university and returned home as emissaries for the sport.

From the outset, Cubans enthusiastically adopted baseball and the sport quickly became part of the nation’s culture. It’s been a symbol of national pride since the early days, even before the first professional league was formed in 1878.

When Cubans were fighting for independence from Spain in 1869, traditional Spanish bullfighting was out and baseball was in, standing as a symbol of national freedom.

Spanish authorities in Cuba understood baseball’s symbolic place in the rebellion and actually tried to outlaw it in 1869. But the bans they imposed wouldn’t last. Cubans already had baseball in their veins.

The main baseball competition in Cuba is the Cuban National Series, a 16-team tournament that runs from November to March. Every province in the country has a team in the National Series, and players represent their home provinces.

At the end of the 96-game season, four teams advance to a playoff that culminates in the National Championship. The champion from the National Series represents Cuba in the Caribbean Series.

From May to July, there’s a second major competition in Cuba called the Super Series. This tournament has five teams made up of the best players selected from the National Series. They play 28 games and in the end, the best players from the Super Series are selected for the Cuban National Team to represent the country in international competitions like the World Cup, the World Baseball Classic, and the Olympics.

Where To Watch Baseball in Cuba

Going to baseball games in Cuba is a very different experience from games in the States. Baseball isn’t a commercial enterprise in Cuba — players are government employees on low salaries and there are no corporate sponsors, no ads or jumbotrons, and no concession stands selling food or beer.

Game tickets cost as little as five cents and a motley of vendors sell homemade food to boisterous crowds who squeeze in on wooden benches in the stands.

In every province of the country, you can join the crowds in chanting, singing, cheering, and jeering for the best players in the Cuban National Series. Read on for a guide to all of Cuba’s best baseball stadiums, from the oldest to the newest.

A post shared by Cuba Direct | Holidays to Cuba (@cubadirectholidays)

The oldest baseball stadium in the world, Palmar de Junco in Matanza is the cradle of Cuban baseball. The first official baseball game was played at Palmar de Junco Stadium way back in December 1874.

It no longer hosts National Series games, but the stadium is still in good condition and hosts baseball tournaments, a baseball academy, and the Cuban Baseball Hall of Fame.

Once considered the best ballpark in Cuba, La Tropical was built in 1929. It was the main venue for the Cuban professional league for decades.

It’s now called Pedro Marrero stadium and is home to the national soccer team. Although it’s not used for major baseball games anymore, a lot of the stadium’s historic features are still intact. And from the stands, you can still see the smokestack of the old brewery it was named after.

The Julio Antonio Mella stadium was originally built in 1945 and is known as Chicho Velazquez stadium. Originally, the stadium had a stone masonry outfield fence. Luckily for the centerfielders, it was 500 feet from home plate to the wall, which surely limited how often they needed to crash into the wall to track down long balls.

Following the 1959 revolution, the stadium was remodeled and renamed after Mella, a communist hero in Cuba. The stadium was expanded to seat 13,000 people, and the outfield was replaced with a wooden fence that was reeled into 400 feet at the center.

Since 1977, it’s been the home of the Las Tunas Lumberjacks. Yordan Álvarez, the Houston Astros power hitter who launched a big go-ahead home run in Game 5 of the 2022 World Series, played two seasons for Las Tunas before defecting from Cuba to play in the majors. 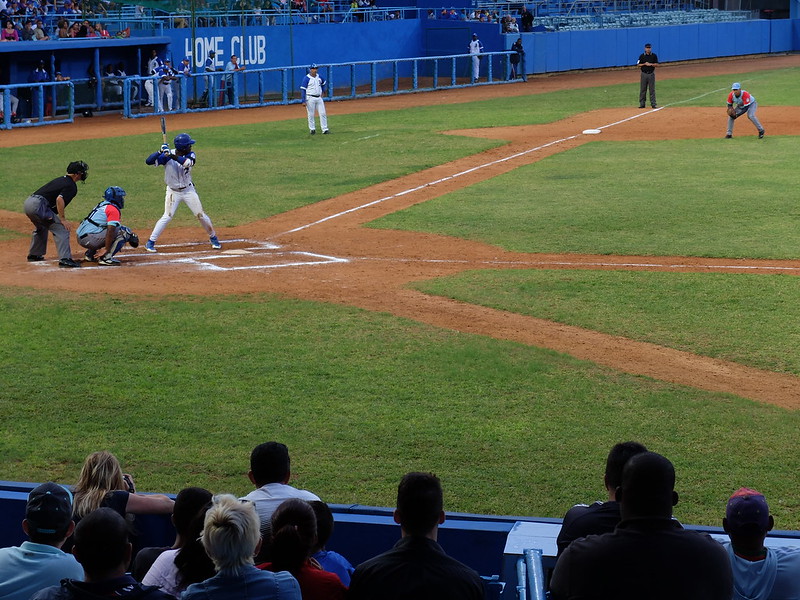 The Estadio Latinoamerica in Havana is the second largest baseball stadium in the world after Dodgers Stadium. It opened in 1946 in the municipality of Cerro, Havana, and was known as the “Colossus of Cerro.”

This stadium, where strong wind blows in from the outfield, is a pitcher’s park and home of the revered and reviled Industriales.

In 2015, Barack Obama visited the stadium to watch the Tampa Bay Rays play the Cuban national team in an exhibition game. It was the first time an American president had visited Cuba since 1928.

Cristóbal Labra is a small stadium that seats 5,000 in the sleepy city of Nueva Gerona on Isla de la Juventud. It’s the home of the Piratas ballclub, named after the pirates that used to hide in the coves of this island off the coast of the Cuban mainland.

The stadium opened in 1957, and for many years was known as a hitter’s paradise, with outfield walls as short as 310 feet in right field and only 390 in center. Home runs sailed freely out of the park until 2003 when they pushed the walls back.

The home team didn’t reach the playoffs for the first 20 years they existed, finally reaching the postseason in 1999. In 2015, the Piratas reached the finals for the first time, but they came a win short of the title.

Mártires de Barbados stadium was officially inaugurated in 1956, but it had already been hosting games for years. This stadium was raised brick by brick around a field where locals had been playing since 1949.

The stadium has been home to the Gramna Stallions since they made their debut in 1977. It was renamed Martyrs of Barbados Stadium after the 1976 bombing of Cuban Airlines Flight 455. The worst terrorist attack the western hemisphere had seen at that point, the bombing killed all 73 people on board, including the entire Cuban Olympic fencing team, who were returning after sweeping the gold medals at the Central American Championships.

The Nelson Fernandez Stadium opened in 1960, just after the Cuban Revolution, as baseball in Cuba was undergoing major reforms.

The stadium was home to the Havana Vaqueros until 2011 when the province of Havana was split and the newly-formed Mayabeque province got a new baseball team: the Mayabeque Hurricanes.

Nelson Fernandez Stadium has a grass field and seats up to 8,000 fans.

This stadium was known as Ciudad Deportiva until it was remodeled in 1977 and given its current name. Moncada Stadium also hosts soccer and softball games, and there is a gym on the premises for judo and weight training.

The home team Wasps are one of the most popular teams in the country, and when they take on their rivals, the Industriales of Havana, the stadium gets rocking.

Located in the central province Ciego de Avila, this stadium is home to the Tigers ballclub.

It was part of the wave of stadiums built in provinces across Cuba following the revolution.

After years at the bottom of the standings, the Tigers have turned their fortunes around in recent seasons, with back-to-back championships in 2015 and 2016.

The home stadium of the Guantanamo Indians, this stadium has an official capacity of 14,000 people but can be packed with thousands more than that when the home team plays against rivals like Havana.

The stadium is named after the Vietnamese guerrilla fighter Nguyen Van Troi.

Built after the revolution, Candido Gonzalez Stadium opened in December 1965 and was refurbished in 2011.

The home team gets its name from the clay pots used to collect rainwater in this region where water is scarce.

This multi-use stadium has been the home of the Naranjas since they were introduced in 1977.

Stars like Liván Hernández and Yuniesky Betancourt made their home here before leaving for the majors.

In the heart of Cuba’s prime tobacco region, the Captain San Luis Stadium in Pinar del Río is home to one of the most successful teams in Cuban baseball — the Tobacco Farmers (Vegueros). It was one of several ballparks built in Cuba following the 1959 revolution and opened in January 1969.

It’s a lively stadium that fills up with diehard fans from all over the province. Trumpets blare during games to cheer on the Vegueros. The stadium was remodeled in 2004 with a new cafeteria, broadcast booth, modern scoreboard, and refurbished dormitories for the players.

Talented players like José Contreras, Danys Báez, and Alexei Ramírez have made this stadium their home before finding their way to the majors.

In front of the Cinco de Septiembre stadium, a giant statue of an elephant stands guard at the entrance.

Star players like Yasiel Puig, Yoan Moncada, and Jose Abreu all played for the home team Elephants before defecting from Cuba and finding stardom in the major leagues.

One of the largest stadiums in Cuba, the home field of the Matanzas Crocodiles opened in 1977.

The city of Matanzas also boasts the oldest baseball stadium in the world, Palmar de Junco, but these days the important baseball games in the city are played here at this more modern stadium.

Named for the day the Cuban revolution was launched, 26 de Julio Stadium opened in 1978 as a municipal ballpark.

In 2011, a new ballclub was formed to represent the newly-established Artemisa Province in the National Series, and 26 de Julio Stadium underwent major renovations to welcome in the new team.

New broadcasting booths, dugouts, locker rooms, and stadium roofs were installed. The Cazadores team has yet to make the playoffs, despite a roster full of excellent pitchers.

This beautiful ballpark opened in 1979 with a match between Holguin and Villa Clara.

Home of the Gallos, José Antonio Huelga Stadium is named after one of the great pitchers in Cuban baseball history, whose life was cut short by a car accident at age 26.

Scroll back to top